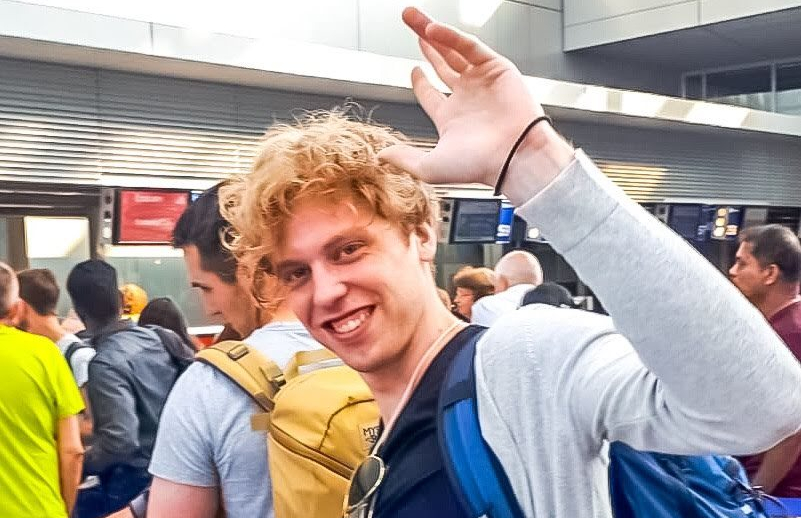 It’s the first of june and today is a special day for me. It’s friday, the last day of my internship at a local newspaper, and next monday I’m leaving to spend a month in Sri Lanka. I’m excited, because it’ll be the first time for me to go to an Asian country and add to that: I’ll be going solo.

Fast forward to Monday: my dad is driving me to Frankfurt Airport. The weather’s great and the sun reflects on the German asphalt. My dad says jokingly: “we can still turn back, you know. You don’t have to go so far away for some good weather”. But I’m determined and I won’t turn back now anymore, because it’s finally happening: I’m leaving for Sri Lanka. Alone.

I’ve done as many preparations as I could on such short notice. I packed my back, got everything from my check list in there, I got my vaccinations (oH nO, i’M aUtIsTiC nOw) and all other kinds of medicines I might need for this trip. I was surprised I didn’t need any malaria pills; apparently, it doesn’t occur in Sri Lanka, so that was a relieve. I’m carrying a lot of books though and I’m uncertain if I’m really going to read all this when I’m on the road, but we’ll see.

What I didn’t plan though, was the enire journey I was going to make. Of course, I read into the coutry and I learned myself some Singalese phrases, but I wasn’t yet sure where I was going to go. I figured I’d do that when I arrive in Colombo.

All packing aside, last year’s been a busy year for me. I worked full-time in a bar all summer and after that, I was combining college during the week and working in that bar during the weekends. Finally, I had my internship and I worked for a full 3 months from 9 to 5, often working longer hours, which I wasn’t getting paid for. That may sound like exploitation, but to be honest, the first two months I didn’t mind getting “ripped off” like that: I liked what I did, so I just went with it. But getting ripped off, that’d be a big theme of the journey ahead. It’s a pity I’d discover that the hard way later.

At the airport, me and my father have one last meal together before my flight. It’s around this time that I start to get a little nervous, I’m not going to lie. My father must’ve seen that immediately, but he knew that bringing it up, would only leave me more stressed out, so he tries to deviate the conversation to other subjects. When we’re done eating our vegetarian Wiener schnitzels (that tasted like, well, nothing at all), my flight number echoes through the hall of the airport, calling me and my fellow passengers to board.

My father and I walk to the line. “Well boy, this is it,” he says to me. We hug, say goodbye and then he leaves. It’s this moment that I really feel alone and I feel my adventure is starting. It’s scary, yet exciting at the same time. But I remember – if I’m completely honest – I was predominantly scared at this point.

It must be about 9 p.m. when we take off and I entertain myself by watching the Blade Runner 2049. I hadn’t seen it yet, like so many other huge blockbuster movies I didn’t see. But this movie was amazing, I can remember. Something that struck me though, was that all nudity in it was censored. I was flying Emirates, so that didn’t come as a surprise, but when I saw even the nipples of statues were blurred, I seriously started thinking about joining the #freethenipple-movement (which I’m already a big fan of, I must say).

I make a stop in Dubai at around 4 a.m to catch my flight to Colombo at around 7 a.m. I sit down on a bench and not much later, I’m joined by someone with a big cart and a lot of bags in it. I can see he looks at me a couple of times, giving me the impression he’s open for conversation. Although I’d be glad to do so in normal circumstances, I’m too tired right now so I try to go to sleep. He immitates me, but while I’m merely trying, he seems to actually succeed because not much longer, he’s leaning against his cart, snoring. Frustrated as I am, because I’m not as fortunate as my fellow traveller beside me, I decide to pick up one of my books and try to read, but I’m to tired to do that as well. A purgatory of tiredness, really.

Thirty minutes later, the man next to me wakes up. It looks like he had a bad dream, because he’s startled. I ask him if he’s okay and we start talking.

Turns out, this man had a story to tell. He grew up in Sri Lanka, but he now lives in Germany. The tsunami that hit Sri Lanka in 2004 had made him homeless and he’d lost a lot of friends and family around him. He was saved by a family from Germany, who took him in and gave him a chance on an education, in which he succeeded. He now works for charity, trying to give children of Sri Lanka a second chance.

He’s built up a live in Germany, but never lost his country of origin out of sight. I’m given his business card, which seems legit. We talk the entire time, all the way into the airplane. Only the fact that our seats are far apart, makes us disperse, but this would be my first experience of the incredible openness of the Sri Lankan people; a porperty I tried to take back to my home country later.

The plane takes off and five minutes later, the plane is landing again. Surprisingly, I slept through the entire flight, so I feel like killing two birds with one stone: I got some sleep and I didn’t have to entertain myself with some lame movie on the plane or anything else: the purgatory of tiredness was finally over.

After picking up my luggage and taking some cash out of the atm, I eat my first Sri Lankan samosa and my God, those are delicious. It’s like something I’ve never had before: these kind of samosas from Sri Lanka are no match for the ones in any Indian restaurant I’ve ever been to in Europe – believe me: I’ve tried.

After this incredible lunch, I walk over to the street and wave to one of the taxi drivers. As one walks up to me, I say: “To Colombo, please.”

Next: Colombo part I: meeting my first friend

Click HERE to turn back to the Travel Blog

2 thoughts on “Leaving for Sri Lanka”